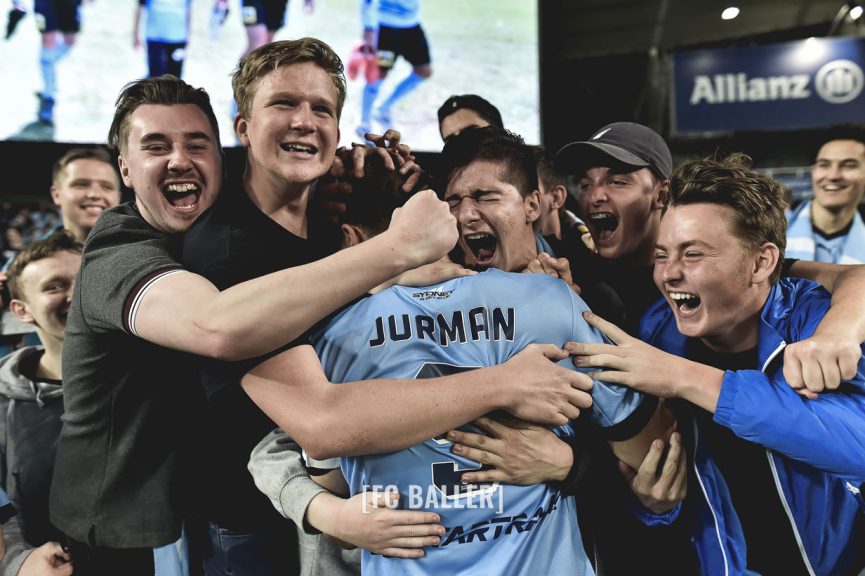 Echoes of “We are Sydney” engulf the inner bowl of Allianz Stadium. It was one of most beautiful moments a football fan could witness [albeit Newcastle Jets fans], as the wider Sydney FC fandom stood and sung together in the final moments of their premiership winning and historical making sky blues’ victory.

What we witnessed will be forever told in the history books decades from now, as the Sky Blues etched their place in A-­league history, becoming the first A-­league team achieve the highest points total [66] in a regular season.

Remarkable in itself, but merely the tip of the iceberg, for a squad which single handedly annihilated its competition, losing only one match in the entirety of their season, and setting a new benchmark for highest points differential [+43].

“When I left the club I was overwhelmed by the amount of support I received as a whole, and I am still very connected to the Sydney FC family”Matthew Jurman

From Fan Favourite to Ultimate Fan:

Only 11 games into the season, Sydney FC fans were left deeply saddened, after learning of the departure of cult hero and fan favourite Matthew Jurman, who would take up a two year offer to play for Suwon Bluewings FC in South Korea. An offer, which would instantly become a massive blow for the club, losing one of its most prized and talented defenders, and more significantly one of it’s ‘better blokes’.

In a recent interview with the Suwon Bluewings defender, Jurman spoke about his move to the K-­League, and his ongoing support for his former teammates in Sydney.

“When I left the club I was overwhelmed by the amount of support I received as a whole, and I am still very connected to the Sydney FC family.” He said.

“At first it was a bit of a culture shock adjusting to a new way of living, but I am slowly settling in, and am thoroughly enjoying the new experience.”

It didn’t take long for the ‘big blue man’ to set his ascendancy of the Korean league, with the defender bagging a double in one of his most recent outings, after two miraculous headers found the back of the net, in a 2-­1 come from behind victory against Gangwon.
Jurman is certainly relishing his recent stroke of form and career move, but admits that he is gutted that he can’t be there for his former club’s Grand Final against arch rivals Melbourne Victory this Sunday.

“I am gutted I can’t be out there with the boys, but that’s just the nature of the move”. He said.

“I will certainly be watching and cheering on the boys to come away with the grand final medal.”

Remember the stitches? What it represents:

Sydney FC will be hoping to avoid repeat of the 2015 grand final result, which saw Kevin Muscat’s men walk out of AAMI park victorious, and left Graham Arnold’s men bruised and bloody.

Quite literally in that sense. After contesting for ball, former sky blues defender Matthew Jurman inadvertently or intentionally copped an elbow to the head from Melbourne Victory striker Besart Berisher, requiring the defender to receive urgent medical attention and stitches.

To the surprise of the majority of spectators, Jurman managed to return to the field bandaged up, and ready to go again. Remarkably he finished of the game with the injury intact. It was in this moment of individual heroism, which I believe had pre-­‐determined Sydney FC’s future fate.
After a bitter and agonisingly close loss, Jurman’s stitches can be said to represent Sydney FC’s resilience and road to redemption, which ironically would make perfect sense, if they were to beat the Victory this Sunday afternoon.

The win would not only claim sweet redemption for the Sky Blues, but would also be a perfect ending for Jurman, who started off the season for Sydney FC, and can be largely said to be an influential factor in the clubs rise to A-­league Juggernauts over the past few seasons.

It would be the perfect thank you from Sydney FC to their former hero, which would be the icing to cap off a spectacular and historical making season for Sydney FC.