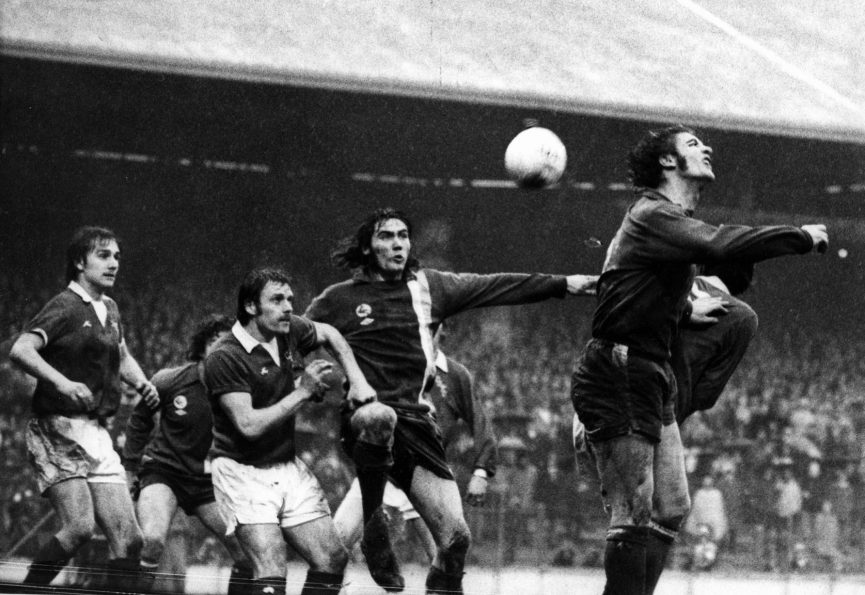 It was the sheer ferocity of the shot on the volley ... over his shoulder. ... If it hadn't gone into the top corner of the net it would have broken the goalpost. Even up against the likes of Pele and Cruyff, it rates as the best goal I have ever seen

It’s all well and good being able to have the highlights of Ronaldo’s career readily available at the click of a button, but I prefer my football legends to be a bit like the Loch Ness Monster to be honest – with a touch of mystery and mythology about them.

I’m sure that in years to come people will look back at the current array of Barcelona, Real Madrid and Bayern Munich superstars, and purr over their undoubted talent, speed and sublime skills – but how would they measure up without our reliance on YouTube? Would we still be able to convey just how good they were? Sadly, it seems that the art of storytelling, like many other aspects of football, has been lost with the dawn of the internet and 24/7 coverage. The highlight videos now spell it out for us in a dumbed down, predictable, goal / step over / nutmeg formulaic montage, usually accompanied by a Stormzy backing track for some reason, as if he adds something crucial to the mix. There’s no need for us to think or wonder anymore. It’s all too convenient. Too easy. We’re continually served up watered down mass entertainment that’s wrapped up in a cheap click-bait popularity contest.

Growing up in the 80s watching football and learning about it required planning and application. It was a challenge. An important life skill that you had to develop, refine and learn from, like successfully getting served alcohol whilst underage or chatting up smoking hot girls even though you knew you had no chance. You were lucky if you saw a full match on TV or the highlights of a few games each weekend, and if you missed anything, that was it. Gone. All that remained was to scavenge amongst newspaper reports to find out how your team played, pour over a couple of grainy photos, or listen to recounted tales in the schoolyard – some reliable, some not – much like sightings of the Big Scottish Water Monster itself. But what this process did was allow us to create real stories, real legends, real myths. Stories, that when told well, allowed to us to picture in our own minds just how fast and tricky the winger was, just how menacing the defenders were and of course, just how shit, blind or biased the ref was. There was no analysis as such. No stats apart from the final score. Just stories. And telling good stories was part and parcel of football culture.

There is a fascinating book co-written by Paolo Hewitt and Paul McGuigan titled “The Greatest Footballer You Never Saw,” which harks back to simpler times when footballers were just like you and me. Times when a large proportion came from working class backgrounds and had part time jobs – not emerging from academies or sheltered by agents who protected them and removed them as far away as possible from the real world. The book tells the story of Robin Friday through anecdotes of those that knew him, a centre forward who never reached the heights of the English First Division but is described by those who saw him play as “phenomenal…irresistible.” You see, Robin was a supremely gifted player “gloriously unsuited to the discipline of professional sport,” but a man who was both adored by those who saw him, and feared by opponents who faced him. Once he got the ball, you couldn’t get it off him. Five minutes into each game his socks would be rolled down, legs shinpad free, and with tackles flying in he would tear defences apart with his vision, skill and natural goal scoring ability. Many of his goals defied belief – from distance or mazy dribbles through packed defences – but he was equally happy making goals for others simply because, “he was a warrior who could, and would, do anything to win.”

A vital fixture on 31 March 1976 for example, pitted fourth-placed Reading at home against Tranmere Rovers who occupied third spot. Internationally experienced referee Clive Thomas took charge of the game. Friday, who had already scored 18 goals that season, rose to the occasion with an effort that has been described by many sources as one of the greatest ever scored. With the score 2–0 to Reading, the goalkeeper Steve Death threw the ball to the right back Gary Peters, who spotted Friday standing near the left-hand corner of the opposing penalty area. Peters passed high and diagonally across the pitch towards his forward, who jumped and used his chest to cushion the ball and knock it into the air with his back to goal, about 25–30 yards away from the net. As Friday landed, he powered the ball towards goal, striking over his shoulder and turning after the ball had gone. The shot flew straight into the top-right-hand corner of the net, stunning the crowd, players and also Thomas, the referee, who put his hands over his head in disbelief. “I’ll never forget it”, Thomas recalled. “It was the sheer ferocity of the shot on the volley … over his shoulder. … If it hadn’t gone into the top corner of the net it would have broken the goalpost. Even up against the likes of Pele and Cruyff, it rates as the best goal I have ever seen.” Reading went on to win the game 5–0. When Thomas told Friday after the game that he had never seen a better goal, he replied, “Really? You should come down here more often. I do that every week.”

Whilst learning his trade as a footballer Friday worked as a plasterer – but his career nearly had ended before it begun when he fell off some scaffolding one afternoon and was impaled, through his arse, on a railing spike. He pulled himself off and was taken to hospital where he underwent surgery for 8 hours to repair his intestines. It wasn’t long before Friday was back playing, signing professional forms for Reading in 1973 for $750. But it wasn’t just his performances for Reading and Cardiff City that cemented Friday’s legendary status. He played as he lived. As a hedonist. A cavalier. A free spirit. Before turning professional he’d spent time in a youth detention centre for stealing a car radio, where a prison guard recommended him to Reading after seeing him play against his fellow inmates. Upon leaving, aged 16, he moved in with his black girlfriend – a relationship whose cultural make-up was unheard of in 1970s Britain. Rumours of a rampant drug habit and drinking followed him wherever he went, and he was often found in the pubs and Caribbean dancehalls of inner city London, high, drunk, and more often than not half or fully naked – sometimes when he was supposed to be playing. He turned up 80 minutes late to one particular game, and with the scoreline locked at 0-0 went on as a substitute to bag a late winner in a 1-0 victory. He arrived in the changing rooms before his Reading debut covered in brick dust, wearing jeans and filthy boots – refusing to wear the club blazer and tie.

Neither team-mates nor opponents were immune from his antics. An iconic photo shows him flicking an opposition goalkeeper the V-sign after rounding him and placing the ball in the back of the net, whilst another story tells of how he left a freshly laid turd in Mark Lawrenson’s kit bag after he criticised his antics for “being unprofessional.”

He did though, reserve special affection for the fans, and would spend hours signing autographs or scrounge tickets on their behalf when they were hard to come by.

Friday is often credited with being responsible for turning around Reading’s fortunes – helping them gain promotion to the Third Division in the 1975 / 76 season. He scored 46 goals in 121 appearances before a transfer to Cardiff City a year later. There, Friday would appear 21 times and score 6 before he retired at the age of 25. He’d initially travelled to sign for his new club without a valid train ticket and had to be bailed out of the Transport Police cells by his manager. He died at the age of just 38 in 1990 from a heart attack, spending the intervening years working as an asphalter and decorator, and serving time for impersonating a police officer. In his honour, The Super Furry Animals released a record in 1996 simply but perfectly titled, “The Man Don’t Give A Fuck.”

There are YouTube clips of Friday’s goals and finest moments on the pitch. At least I think there are, because people have sent me the links. I don’t watch them though. I can’t bring myself to watch him play. It’s too late for that. As a football fan, I’m envious of the people that did see him and whose lives were no doubt enriched by the privilege. I prefer to read and hear the stories of what he was like, and visualise, in my own mind, just what a magnificent player he was – someone who played with style, flair and beauty. He might be the best player I never saw. He might not. But his story is the reason I nevertheless prefer my legends like the Loch Ness Monster…with a touch of mystery and mythology. And certainly, without the Stormzy backing track.